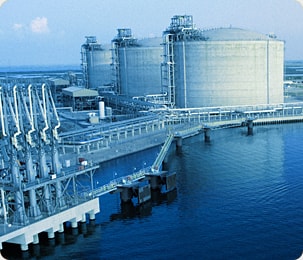 Liquefied natural gas (LNG), is natural gas that is super-cooled to minus 260 degrees Fahrenheit (minus 162 degrees Celsius). At that temperature, natural gas transforms from a gaseous state into a liquid. When in liquid form, natural gas takes up to 600 times less space than in its gaseous state, making it feasible and more economical for transport over long distances.

LNG is very safe to transport, and the industry’s safety record is exemplary. For over 50 years, tankers have safely transported LNG around the world.

What if there is a release?

LNG is safely transported by sea because every precaution is taken to mitigate the possibility of a release. If there were a release, vaporizing LNG is not soluble in water and any liquid released on land or in the ocean, would quickly evaporate. There is no possibility for land or water contamination. LNG is non-toxic and it does not chemically react unless ignited.

How is natural gas liquefied?

Natural gas is converted to a liquid in a liquefaction plant, or “Train”. An LNG Train performs four main processes:

Remove dust and slug (water and condensate) along with hydrogen sulfide (H2S) and mercury (Hg). These pollutants can cause corrosion and freezing problems, especially in aluminum heat exchangers.

Carbon dioxide (CO2) is absorbed and removed from natural gas with an amine absorber (acid gas removal or AGR) and remove water using an adsorbent. The removal of these impure substances prevents ice from forming during the subsequent liquefaction process.

Heavy hydrocarbons (C5+) are removed by fractionation before liquefaction. Natural gas is pre-cooled to about -31°F (-35°C) by propane.